It has been a while, but we are back with an all new Prose and Cons!  I know I mentioned that I would share a story about a past convention that I attended, but alas, time got the better of me and I will have to share that story at a later time.  This week we will be talking about a convention that is a perennial fan favorite–Indy PopCon!  This was our first time attending and it was a wonderful experience.  As always, the following description is true about the iteration of the convention I attended in 2019 and may change over time!

Cost: $60 for two adults and two kids with varying other options

This convention has been around for just over half a decade as of 2019, but it already has a strong following.  It is held in the Indianapolis Convention Center each year, and gives those willing to attend a relaxing and fun time with a variety of options.

At its core, the convention relies on the draw of some wonderful talent from a variety of sources.  These include a multitude of actors from television and movies, not a small percentage of which have voiced some iconic characters over the years.  In addition to these noteworthy individuals, there is representation from the YouTube community, podcasting, authors of novels and comic books and artists of many types.

For those familiar with the convention center in Indianapolis, you can get an idea of the size of this convention by comparing it to something like GenCon.  While the latter occupies the entire center as well as rooms in every noteworthy building within half a mile of it, Indy PopCon basically takes about a quarter of the main exhibit hall as well as some of the nearby rooms within the center.  In fact there were several other events happening simultaneously within eye-shot of the main hall.  One positive effect of this arrangement is that I never felt crowded, and getting a nearby room was not quite as impossible as it can be with a larger convention.  It also means that if your time is limited, you can basically see and do everything in a single day, provided the lines for the people you wanted to meet weren’t too long.

Those attending can have a chance to briefly chat with the people whose work they have enjoyed so much, as well as getting a chance for a picture and autograph.  Of course that last part has a cost that varies, depending upon who you want to get it from.  In addition there are a number of panels that you can attend that these celebrities are a part of, as well as a number of panels by others who have some neat stuff to share.

The main vendor hall had a variety of options for buying t-shirts, specialized merchandise, games, books and memorabilia.  Just outside the main hall were several rooms that offered activities like laser tag, video games, anime and others.  While there did not seem to exactly be a unifying theme, there was at least a little something for everyone there.

The event lasted for three days between Friday and Sunday.  A common theme that I am beginning to see at every convention is that not everyone and everything is available every day.  In fact, the first day of any con can feel a little sparse, but this is a good thing if you are planning to attend for multiple days.  First, it gives you a chance to settle in and size up what there is to offer.  Also, because the number of attendees present is lower, it can give you a chance to have just a little more time talking to one of the celebrity guests, that are present for that day.  Something else that takes getting used to is cancellations.  They are inevitable and a bit of a bummer, but scheduling snags and sickness happen.  PopCon was well prepared for this eventuality and the loss of one or two individuals from the roster did not detract from anything, as there were plenty of cool people to meet.

The last thing I wanted to address was the cost.  Comparatively, PopCon is less expensive to attend than many similar types of conventions. 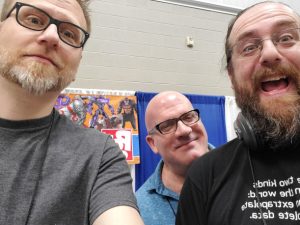 That isn’t to say that you can’t spend quite a tidy sum.  Like any event that has photo ops and autographs, there is the potential to drop hundreds of dollars on that alone, but the base cost is better than at some conventions, and that–coupled with the fact that the city doesn’t jack up the tax rates during this event–means that you aren’t spending extra money on what seems like a bit of governmental greed just to attend.

All in all, the relatively smaller size of the con combined with a nice array of things to do and people to meet makes this con a hidden gem!